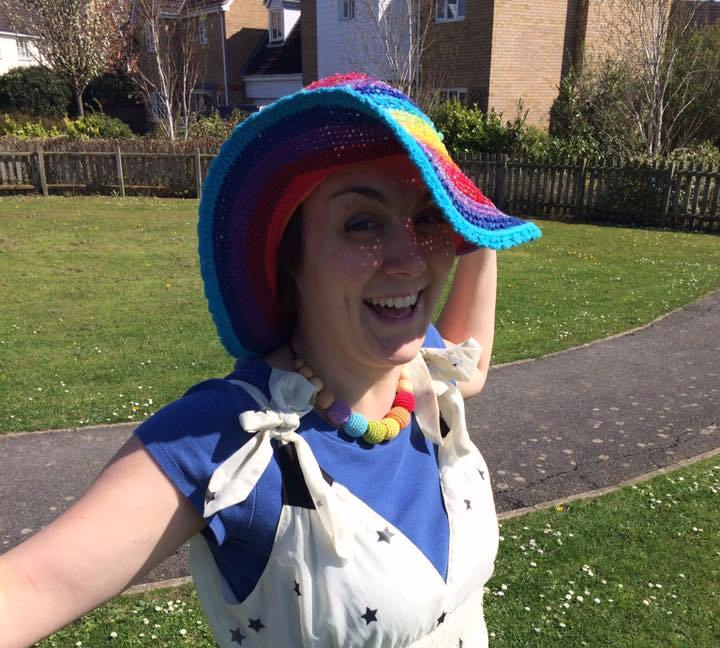 Now that I’ve got the hang of Poetry Mondays, I’m hoping to use the occasional Wednesday to share what I’ve been up to, whether writing, storytelling or wearing one of my various other hats.

Speaking of hats, I wore several at an Easter Parade in Caldecote on Palm Sunday, telling journey stories as we made our way from the park to the social club.  Since there was a hat competition at the end of the event, I made sure to wear a different hat to suit each story – and the final tale of the Road to Emmaus used two hats to swap between the characters of Mr and Mrs Cleopas.  Even Zach had a hat! 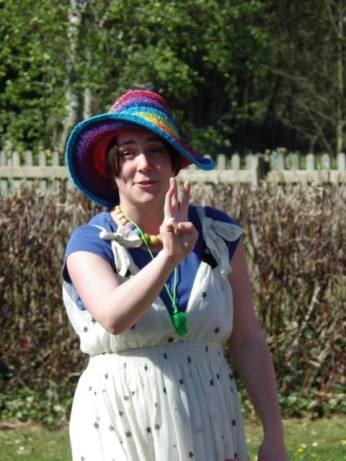 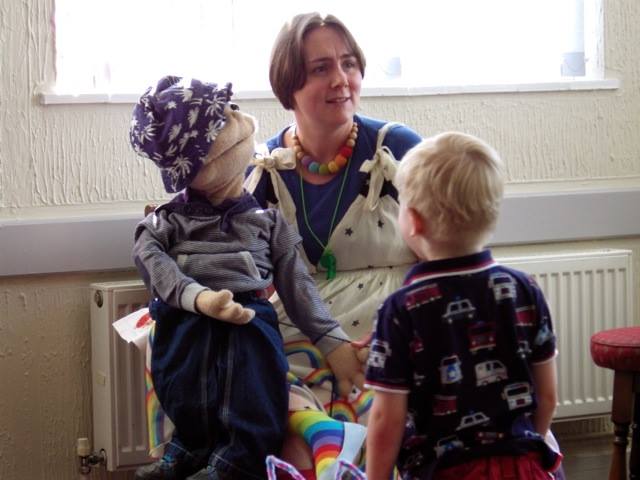 Wonder the Baby Dragon had an outing for St George’s day, telling dragon and monster stories at Hardwick Primary school.  They all enjoyed joining in with the story of Louisa Freya the Dragon Slayer, and hearing about how one of their classmates had cunningly escaped from a dragon island by solving a riddle, but I suspect the highlight was the one where I make this face:

It’s a story for which I’m very grateful to Steve Stickley of the Footprints Theatre Company: I learned it mainly because after hearing his telling of it, my own children pestered me for daily retellings for months.  Unlike Steve, though, I never tell the ending: the children make it up as part of the workshop.

It’s become a bit of a fascinating experiment.  You see, the story begins like a sort of reverse Cinderella: three sisters and a mean Mama who aren’t at all nice towards the only son in the family.  When a child-eating monster captures the sisters, and I hand the story over to the children, it’s not at all clear to them who is the ‘baddy’ – I mean, what’s worse?  A monster or an unpleasant sibling?  Although some choose to rescue the girls, or have them escape, several groups have found a perfectly satisfying ending in letting the nasty sisters get gobbled up.

You can tell which children have a grounding in traditional tales: it’s the ones who spot that there are two problems in the story, the monster and the family, and try to solve both in their ending.  They also tend to use information from the first part of the story in the way they solve the problems.  Interestingly, bits from whichever other stories I’ve told find their way in there, too.

It’s also a great illustration of the freedom of imagination that storytelling produces.  Without images, each child pictures the monster differently, and this shows in their solutions: for some, it’s a small enough monster to trap inside a pot, while for others, it’s such a big monster that the boy can prop open its mouth, climb inside and pull his sisters up through the throat.

I now know over a hundred great ways for the story to finish, including the 40 or so I picked up last week – and isn’t that what sharing stories is all about?

2 thoughts on “What I’m up to Wednesday: Dragons and Hats”